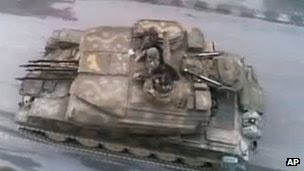 Russia "categorically" opposed foreign intervention in Syria, he said, as outrage grew over the massacre of 108 people in Houla last week.

China's UN representative also agreed, in essence, that they can live with the continued murder of innocents and children.

Why am I not surprised by this?

Email ThisBlogThis!Share to TwitterShare to FacebookShare to Pinterest
Labels: Danomanno, Forsythkid, Russia and China both approve of murder