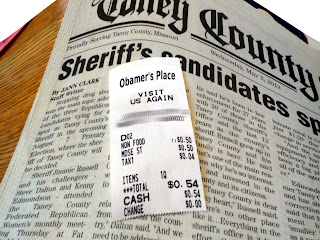 I’m sure that what goes on here in my state of Missouri is just about what goes on elsewhere. We all exist in a witch's brew of rules and regulations that are layered from the very top of our state government right down to the local townships of each state. Each layer of this cake generating hundreds of pages of new regulations each year and whose overall effect seems more to confuse and confound rather than to get anything worthwhile done.

Take the lowly newspaper, for instance; a daily or weekly publication that is not to be taxed in most states under both Federal and State laws. Yet, interestingly, that’s not quite true. I’ve noticed that one store, close to where I live, adds a tax on them as seen in the picture above. (I changed the name of the store because this is going on everywhere, not just here in Missouri). Maybe they just want to be extra careful and charge a tax in case there might be a tax they need to charge. I dunno. Maybe it a sign of the Democratic leadership we have in the White House. (After all isn’t it the credo of the Democratic Party that if you can’t suffocate something to death with rules or regulations, then by God, tax it until the day after forever)??

So, it came as no surprise to me that the boys and girls at the Missouri State Capitol have now gotten it into their heads to create a new tax to be applied to newspapers, ink and other selected items. This proposal, currently headed for the full House, looks like it may be passed into law sometime this year. (I think they are promising that the money will be used to help the blind out. However, I’m not sure if they are referring to someone who is actually blind or just their constituents in general)…
Posted by Dan Owen at 9:49 AM

Email ThisBlogThis!Share to TwitterShare to FacebookShare to Pinterest
Labels: Danomanno, Forsythkid, Missouri tax on newspapers under consideration, Newspapers and taxes