Is Bull Shoals lake to flood? Even with less than normal rainfall? 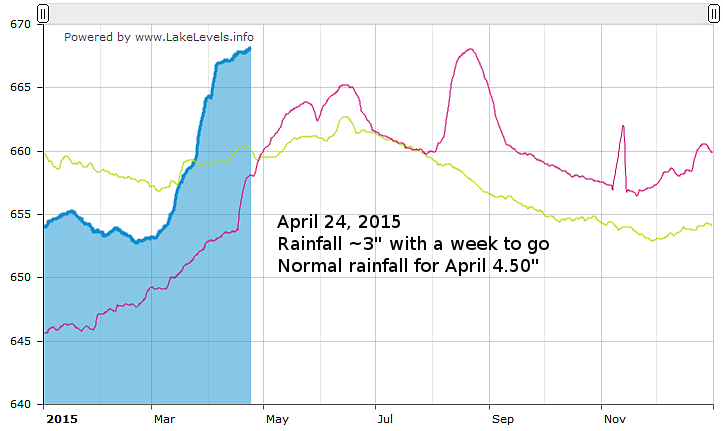 Is is even possible to flood a large area when the rainfall for the year is slightly below normal? Has Jesus finally come back down to earth and produced a miracle? One that contained five feet of water spread over the entirety of the Bull Shoals lake system? That's over 45,000 acres of surface? Wow!

Yet, here we are in late April, 2015. A month that is still behind the average for rainfall for the month, region-wide, and guess what? The lake level, which has been rising since the start of the month, continues to rise! Can you say hallelujah and praise the Lord?

I'll make a prediction that is effective beginning April 24. That is that the lake area will flood with popular parks like River Run being closed to the public before we get very far into May. That individual that lease land to grow crops along the lake will, in some cases, get wiped out! Why would this happen? What did the Corps of Engineers do to prevent it? Maybe we should all just ask Jesus!
Posted by Dan Owen at 1:00 PM