Another bad breakfast? Hell no! 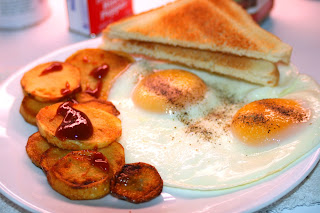 Two eggs, sunny side up, some toast and hash browns! What's not to like? Well, just you wait...

A tasty breakfast, is truly in the eye (or more precisely in the stomach) of the eater. I believe that! However, at any given time, nutritionists and other so-called food experts have nixed and then re-supported many foods. Eggs have almost always been on their radar due to the high cholesterol content. And, hash browns! Don't even go there! Fried foods have been a no-no for about ever.... But, ever so often there is a medical reversal that has some import. Take whole milk, it turns out that it ain't so bad as was thought. The 2% stuff is actually worst for you to consume! And those eggs, well some scientists now think that some people naturally produce a boatload of cholesterol – a genetic thing. The real comparison, that must be observed, is the ratio of LDL versus HDL in a given person's bloodstream. As long as that ratio of the two is close, no problems baby... Who knew?

And, those hash browns! Well, they are much more problematic due to the saturated and carbonized fat content you get after drying in hot oil. I've personally got problem with admitting that eating foods cooked in boiling oil are likely bad for our bodies. Over time, that is! The thing with eating these foods has to do so in moderation. [Hey, you knew I'd get Thoreau in here someplace]. Yes everyone! 'All Things in Moderation', should be a tattoo we get stamped on our foreheads shortly after birth! (It would also have have to be stenciled in reverse so that it would be readable as we stand in front of the bathroom mirror each morning). We'd then out there into the world would DO THINGS IN MODERATION! See! Easy greasy. You'll likely live a great existence as you go forward sampling bacon strips, hash browns and fermented liquids, all in moderate style! But, I'm mentally wandering and need to get back to the business at hand... 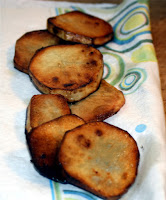 When I make this sort of breakfast, I like to use a counter top induction cooking stove because they are so insanely efficient, energy wise! I also make it a point to use stainless steel frying pans as opposed to non-stick as I'm hesitant to use a surface that flakes off with age. And, no, stainless pans do not cause a sticking problem if used properly. That's an old wives tale, in my view. I also generally like to make the hash browns from scratch using potatoes and a method as seen here. (No, I do not like to reinvent what others already have mastered)! And, when I'm not in the mood to mess with making hash browns, I will often simply peel and then slice a potato into thin 'British dollars', flash cook them in oil and then splash on a small amount of A1 sauce! An awesome taste!

That chore done, I'll take my still hot frying pan, cool it down a bit and then break open two farm fresh eggs. To these, I add just a splash of water and cover it using the induction stove top set at the lowest setting. While the eggs are cooking, I'll throw in a couple of slices of white bread into the toaster. Yes, I use white bread! (That goes back to the moderation thing. I'll generally make this meal only a few times a month).

A few minutes later, it's time to assemble the ingredients. Everything then goes onto a microwave safe plate and is nuked for about 12 seconds on high. (This insures the meal will be uniformly hot to trot). [In days gone past, I'd also have a 'Steak and Eggs' meal deal, but can no longer afford buying good meat].