Iowa voting could be impacted by blizzard! 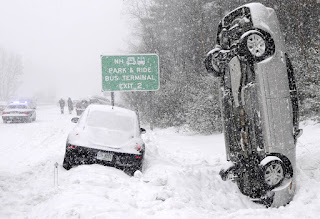 'In the end, the direction of American politics may all come down to a snowstorm.
Months of fierce campaigning have left both party leadership races too close to call in Iowa as the rural state prepares to become the first, and most influential, to pick candidates for November’s presidential election.

Opinion polls suggest a narrow lead for Donald Trump among Republicans and a near dead-heat between rival Democrats Hillary Clinton and Bernie Sanders ahead of the caucuses on Monday evening.

Yet Trump and Sanders are very dependent on support from younger voters and anti-establishment types who tend to turn up less reliably than the party faithful backing Clinton and the more traditional Republicans'. [Excerpt from another news story]. The bottom line? Be sure to tune into your media outlet of choice as this vote will be fun to watch as a good old fashioned blizzard roars into the Iowa state!

AND THE OTHER STORY! 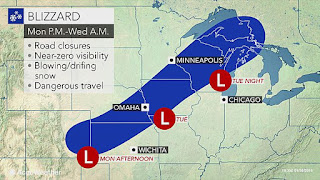 The story behind the Iowa story will be the frenzy among media people as they try to 'get out of Dodge' before the full fury of Mother Nature is unleashed. The timing of the approaching blizzard, it's true potential and how it will impact travel is hard to say as of this posting. Here's the most recent forecast for Polk County, Iowa where many are situated to cover the voting:

I'm guessing that many will be stuck in Des Moines, leaving media outlets like Fox News scrambling for fill ins at their studio in New York.
Posted by Dan Owen at 7:18 AM