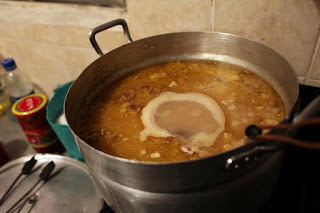 A few of my readers have commented that most all my food reviews are centered around American cuisine, and that that could be considered somewhat racist. To make amends, I would like to present here a truly 'interesting', yet international dish that is frequently eaten on the slopes of Armenia.

Take four medium cow’s hooves and ankles and 1 brain (strictly optional); boil this in a large pot of water for 32 hours (without seasoning); remove scum. Before you know it, you will have true Armenia-style Khash, “the masterpiece of Armenian cuisine”! A meal is apparently always eaten early in the morning. “It is not wise to eat it late,” my friend Chef, Shirak implored. “Khash is so rich, you need all day to digest it.”

He took me to visit the kitchen, the night before the big feast; I carefully inspected the great pot where four cow’s feet and ankles and one smallish bovine brain are bubbling. “It started cooking last night, because really great khash must be stewed for 32 hours,” stated Shirak. I agreed to meet with him when that time is up: I think it was about 7AM.

7:15 AM - After sitting down at a pitted but solidly built wooden table,  my friend and chef Shirak ladled out a heaping bowl of steaming Khash. While I waited for it to cool a bit, I inquired as to the name. Shirak responded that the name had something to do with with what most people do with their teeth when they first try this most interesting disk. Oh, I blurted out in surprise, 'You mean gnashed'!

Well, the food tasted a little strange to my American taste buds, but I soldiered on through it. Later on, I had to agree that the full feeling in my stomach persisted for the rest of the day; sometimes approaching, but not quite reaching a state of true nausea.... My advice would be to make sure an invite a small close group of people you really dislike, serve them this soup, and then only inform them of the ingredients once they've pushed back from the table! Bon appetite!
Posted by Dan Owen at 7:30 AM