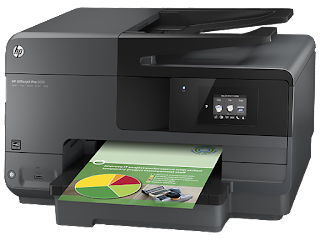 This critique will be of the informal variety and it will be somewhat drawn out with updates as the first printer did not work well.

As my old and venerable Hewlett Packard C6180 multi-function printer was getting along in age and was no longer working perfectly, I decided to pull the trigger on the purchase of a new model. As I've been a past customer of HP for some years, I decided that I wanted to stick with the brand an so limited my search field to just those printers that could get a couple of things done; mainly color printing and the ability to scan. The successful candidate also had to be able to work wirelessly and I wanted a small USB port so that I could archive scans onto a flash drive. The HP 8610 seemed to fill that bill at a cost of only about one hundred dollars.

I ordered my unit through Amazon as I am a Prime member (free 2 day shipping) and because I knew that they would take care of me in case a problem arose. Note also that HP's customer service does not allow a customer to send them an email, electing instead to use their cumbersome online chat vehicle.

On the day of the arrival I began to unpack all the components of the printer and was pleased to find that assembly was straightforward. I grew concerned, however, when I noticed that one of the ink cartridges appeared to be leaking – it was the yellow cartridge and there was ink covering the other cartridges as well. I cleaned these off as best I could and inserted them into the printer. Sadly, the very first test print indicated there was going to be a problem as it appeared that one of the colors was not printing correctly.

That prompted a call to Amazon's Customer Service Department where I was very quickly helped out. The representative quickly determined that something was amiss and offered to send me a replacement printer. I agreed to this and packed up the one I had received while waiting for a return authorization certificate to arrive from Amazon.

As the printer did work well overall, I decided to offer up some thoughts concerning the setup and the noise issues.

Setup – Everything went swimmingly until I saw the blinking blue light that indicated the printer was not seeing my WiFi network. I had to perform a few gyrations to get it to finally work and I'm not sure the average customer would have been very happy as a result – The bottom line – the process of syncing up with a persons wireless router should be a little more seamless.

Noise – The HP 8610 is not what I would call a quiet printer. It had a tendency to grind through the printing process and I could see how this might get on someone's nerves over time. Remember, though, you get pretty much what you pay for and I would hazard a guess that the more top of the line printers made by Hewlett Packard are a lot quieter. On a good note, the scanner is whisper quiet and fast!

As the black ink output seemed unaffected by the problems with the other cartridge, I did print out a couple of samples and was pleased with the degree of fine smug free detail I observed. Thus, I will now await the arrival of the replacement printer (due at my place on Jan 8 2016) and will report via a future update...
Posted by Dan Owen at 6:40 AM