Random thoughts to close out January 2016! 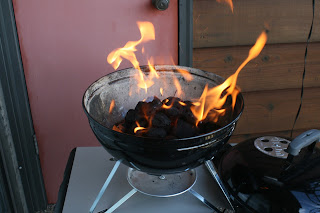 Yes, it was a warmer than normal Sunday in late January. A time of year when most everyone should have been found hiding inside as the cruel winds of winter raged outdoors. Only, that wasn't the deal down here in southwest Missouri at least on this particular day! Happily, from time to time, us 'pseudo southerner's' get a much needed reprieve in the form of dishwater styled southerly winds. And then, as soon as the mercury gets much above 60 degrees, those of us that like to grill are out doing our grilling thing. Note, however, the strange behavior of the outside temps early on... 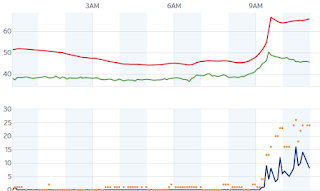 Tongs in hand and a hot charcoal grill set the stage for one aging gnome standing on his condo balcony in shorts! I had placed eight check legs into the grill about an hour earlier and was getting ready to slather them with from official KC Barbecue sauce. Does it get any better than this? I mused to myself as I idly contemplated the word 'slather'. That word sounded somehow both sexy and a little sick at the same time. (According to the Webster dictionary, to slather is to spread or smear (a substance) thickly or liberally. As in to "slather on some tanning lotion"). The chicken took a lot longer than they had last time I grilled, of course it was in the 90's then.

'Well!' I said to no one. 'I'm gonna slather the living be-jesus out of these legs!' I then got down to the business of turning a so-so gathering of cooked chicken flesh into a tangy assembly that made my mouth water in anticipation! That job accomplished, I eased myself down into a cheap folding chair to better contemplate strange English words, hot n tangy chicken and my place in the scheme of things. As I sat there, sipping my beer, I thought about grilling and temperatures.

While there is little scientific evidence to go on. My best guess is that for most, there is an acceptable 'grilling range temperature' below which grilling is not done. (Sure, there are a few hardy souls who grill out all year. But, those are the really oddball types who do all sorts of zany things anyway. While they are fun to watch, the more sane members of the grilling clan choose to get their equipment cranked up after the mercury is above at least sixty degrees). Other factors that may influence the decision to grill out probably include; the chef's state of sobriety, clear or partly clear skies and calm winds. (As I can only speak for us men, I can tell you from experience that alcohol consumption often sometimes plays a pivotal role in there somewhere)! Getting that urge to grill is also linked to the first day in the new year when a really awesome weather day presents itself. Sort of like it did on January the 31th! 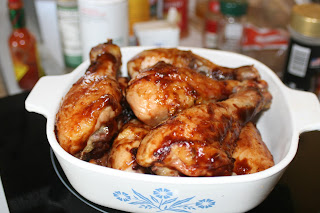 On that day, I arose promptly at about 9AM and gathered together all the tools I needed to proceed. I had purchased some chicken along with a six pack the day before and thus shuffled out onto my condo third floor balcony to go and 'get er done'.

As you can see, my minimal efforts paid out as just an hour later the chicken looked freaking awesome!