While it is very true that I can be prone to panic, (and sometimes for no real reason at all), mid May 2016 saw me really worked up, and for once, it was about something very real!

It seemed that a series of weather systems were posed just off to the west and were forecast to drop as much as an inch of rain over the next several days all across the region! Now as many of you might surmise, an inch of rain isn't all that much, especially when you consider that it would be falling on semi-parched earth! But, there was a really big fly in that ointment and I am one of the few, the blessed few you might say, who know it!

And now, I've decided that it was time to share my knowledge, to one and all! But, in order to do so, I would need to fill in some of the cracks in this pot. (The rain pot that is, not me, my pot is not cracked)! 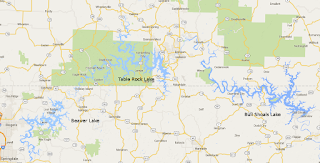 You will note in the map at right, that there are three main bodies of water, each with a dam at its tail end, hence the name Tri-Lakes. Beaver Lake is at the highest elevation with the next two lying progressively lower. Now, when a rain system typically enters this area it comes from more or less the west and proceeds easterly dropping moisture all along the way. Thus, when Beaver Lake fills up they open the Beaver Dam which dumps oodles of water into Table Rock which as a period of time will dump its excess into the Bull Shoals system. Typically, this process would be very orderly, were it not for one strange fact. BEAVER LAKE SEEMS ABLE TO MANUFACTURE WATER OUT OF THIN AIR. Yes, you heard that right! I liken this phenomenon to the Bermuda Triangle in that some very strange magic happens over da Beaver from time to time. Perhaps even a monster! And, apparently that lake monster can create actual mass where none existed before! ( I realize that this is somewhat shocking news and I have repeatedly sent letters to the Corps of Engineers office informing them of this revelation. But, for some reason, they have elected not to answer my letters or even to inform the public). Is this yet another Government conspiracy?

Now, you might well ask if there is any proof to these crazy sounding assertions? Yes, I reply. You need only refer to my post titled 'The Beaver Lake Mystery' to see graphical evidence of the appearance of over eight feet of water made apparently from just seven inches of rainfall!!

And, just today, my trusty Ouiji Board has informed me that the Beaver Lake Monster thingy is about to crank it up again! You all have been warned!

Email ThisBlogThis!Share to TwitterShare to FacebookShare to Pinterest
Labels: floods, Forsythkid, Humor, Ouiji Board, the Beaver Lake Mystery, water from nothing