Well, they have a deck anyway! 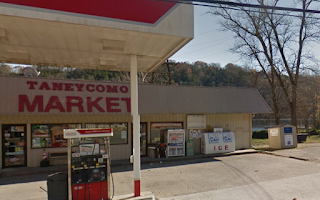 Rockaway Beach MO - After hearing a rumor that some sort of bar was going to open out behind the Taneycomo Market off Hwy 176 in Rockaway Beach, I drove down there to sneak a peek.

When I arrived there was all sort of lumber strew about the front of the establishment, but no one I could see was actually working. I came to find out the the carpenter that had been recently hired had also been fired! And, while there was a nice expansive deck situated behind the market, I could see little if anything else. No chairs, no tables... really, no nothing.

I inquired as to this state of affairs with one of the locals and was informed that things were pretty much at a standstill. Even the interior of the market itself looked partially gutted. I was told that there were problems with licenses and other paperwork (neither was substantiated) and that the owners were looking for a new carpenter. 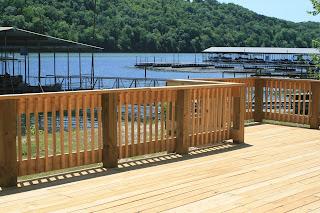 Here's hoping to an eventual grand opening and I personally hope they have an open air bar and eatery as those types of establishments are pretty much non existent in my neck of the woods. And, while I may not know very much, I do know that this deck needs to be stained and treated pretty darn soon! Otherwise it might be a bit warped...

I drove by this now closed gas station only to learn that they plan to reopen soon as a bar! Other rumors were that another gas station located just to the north in  Merriam Woods was also shuttered.Also, I have no information on when this new drinking emporium will open or even what it will be called, as the owners who have my email have failed to contact me....
Posted by Dan Owen at 10:19 AM