The hidden delights of a grilled bologna sandwich! 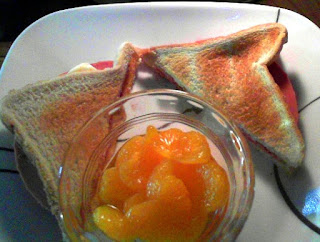 OK. What delights might I be a referring to? In point of fact, there wasn't much to say in the way of good stuff about my luncheon sandwich this day. It consisted of a slice of bologna sandwiched between two slice of white bread. I also slathered on a tablespoon of mayo to to help make what was mildly bad nutrition into something even worst!

For this report, I brought in a police sketch artist who did a pretty bad job, (but he was free and so I had that going for me). But, if you use your imagination, you can see that he did a good job labeling the main ingredients:
There you have it! A 250 calorie concoction that, were you to feed it to your dog on a regular basis, would likely kill him within just a few years!

Also, on this day, I had a small amount of Mandarin oranges 70 calories) in a desperate attempt to be able to use the words 'fair nutrition'.

So, what exactly are those hidden delights. Beats me. This junk is about all I can afford to eat while basking in Obama's Utopian Society....
Posted by Dan Owen at 11:26 AM