CRE bacteria here in the US! 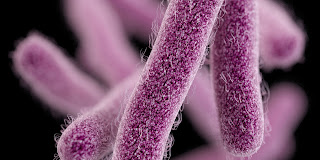 A long-dreaded super bug that is a strain of E. Coli has made its first appearance in the United States, researchers at the U.S. Military HIV Research Program announced Thursday.

After being identified in China, Europe and Canada, researchers identified mcr-1 positive— part of the deadly family of bacteria carbapenem-resistant Enterobacteriaceae, or CRE— last month in a urinary tract sample in Pennsylvania, and found it was resistant to the antibiotic colistin.

Colistin, known as the last line of defense against the most antibiotic-resistant bacteria, now appears to be exchanging genes for its resistance and waning in strength, according to a news release.

"Colistin is one of the last efficacious antibiotics for the treatment of highly resistant bacteria. The emergence of a transferable gene that confers resistance to this vital antibiotic is extremely disturbing,” Dr. Patrick McGann, of the Multidrug Resistant Organism Repository and Surveillance Network (MRSN) at the Walter Reed Army Institute of Research (WRAIR), said in the release. “The discovery of this gene in the U.S. is equally concerning, and continued surveillance to identify reservoirs of this gene within the military health care community and beyond is critical to prevent its spread.”

Since the first transferable gene for colistin-resistance was identified in China in 2015, microbiologists have been monitoring food supply and humans for its presence, according to the study that reported the U.S. finding, which was published Thursday in Antimicrobial Agents and Chemotherapy. In Pennsylvania, the urinary tract infection sample from a 49-year-old female patient receiving treatment at a military facility was sent to the Walter Reed National Military Medical Center (WRNMMC), where colistin susceptibility was tested. Tests revealed the bacterial infection would be resistant to colistin, and the center sent the sample to MRSN for sequencing, which identified the colistin-resistant gene, mcr-1. It’s unclear how the woman contracted the infection.
According to the Centers for Disease Control and Prevention (CDC), infections with CRE germs are very difficult to treat. One report suggests they may contribute to death in up to 50 percent of infected patients.

In the new study, researchers reported that through intergovernmental communication, the CDC and the Department of Agriculture (USDA) also have identified a swine intestinal infection with a single mcr-1 positive E. Coli strain. The Pennsylvania case and swine case may not be linked, but “the evidence of the strain in the U.S. is a public health concern” that “could worsen the current global crisis of antimicrobial resistance,” according to the release.

Excerpted from an article that appeared on Fox News
Posted by Dan Owen at 11:16 AM