Well, maybe not a best seller! 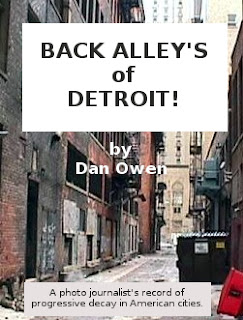 After two years of nefarious lurking about in Detroit's back alley's, our intrepid photo journalist DanO'manno' has just released a softcover book that exposes the uber soft underbelly of a nation in distress!

After a very shaky beginning in Detroit where this brave man DanO was repeatedly exposed to all sorts of viruses and germs, DanO went on to photographically capture much of the more seedy nooks and crannies of a once great metropolis. DanO was heard to remark that 'while a city may look OK from inside a limo, it gets a bit smelly when traveling from alley to alley in a tattered cab, after dark, and with someone who doesn't speak very good English'.

As of this post, DanO has not yet sold a single copy, but is encouraged, none the less. 'Someone will by a copy or two', he quipped to a reporter. 'Just look at what's selling on the Internet!'

We wish DanO the best as he heads for his next center of decay, Washington DC!
Posted by Dan Owen at 4:26 PM