Is Obama the unaccountable President? 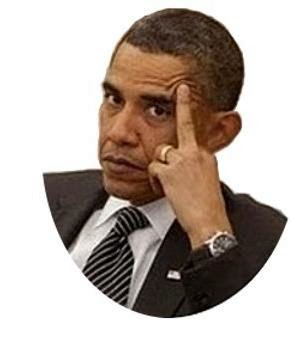 Each time Mr. Obama is faced with a scandal, he does three things: First, he expresses outrage (he is, after all, a man only of words, not deeds); then, he blames his predecessor, George W. Bush; finally, he wraps the entire mess up in bureaucratic red tape — a blue-ribbon investigation.

That last move, Mr. Obama’s go-to dodge, does two things: No one, not even the president himself, can speak on the matter (“It’s under investigation and we should hold off on any … “); And second, a lengthy probe means Americans will be distracted and move on by the time any final finding is reached.

With every scandal, the president — the CEO of the United States, if you will — said he first learned about it in the papers. If he were head of Apple or IBM, he’d have been fired years ago, because in business, it’s your job to know, and ignorance is, frankly, even worse than failing. Fail = fired.

So, is Obama THE unaccountable President? No, I'd say he is just a no account all the way around...

Currently, his Administration is at two dozen scandals and counting.....

The above material was excerpted from an article by Joseph Curl of the Washington Times!