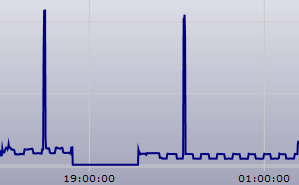 As a storm front swept through my neck of the woods near Forsyth Missouri on Monday evening I thought that it was not very severe in nature. Then, at 6:18 PM the power went out and then stayed out until 8:33 PM when it was finally restored. A call to the Empire Electric people, early on, was a bit distressing as the person who answered told me they were 'clueless' as to the cause.

As I sat there in the darkness, I reflected that outages with this group are quite common. There had been a handful in just the last 30 days! When I lived in a suburb of Chicago years ago, I think there were like three outages in ten years! and, they were all caused by things like blizzards and ice storms!

So, what is it with this group? Are they dealing with an aging infrastructure or is it something else?
Posted by Dan Owen at 8:36 AM