Climate disaster is imminent, according to Scientific American! 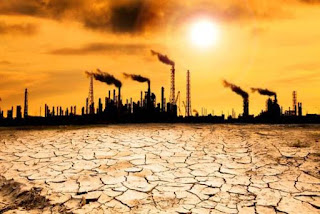 'The latest IPCC report does not mince words about the state of our planet: we must act now to achieve global change at a scale that has “no documented historical precedent” in order to avoid the climate catastrophe that would result from a 2 degree C rise in average global temperature.'

Read Scientific American's post here. Then please give a thought to some of the other realities. In my opinion, there is no way that the world will ever unite into one cohesive political force that could then address a multi-trillion dollar systemic problem. To actually have any effect over the next 100 years on global processes that are in place; every country would have to pretty much sacrifice their future development. That would include the halting of the massive deforestation that happens in many 2nd and third world nations all over the planet. That would include the complete carbon footprint dismantling of America, Russian, Indian and Chinese technologies and basically a fast return to the 1700's for all. That's not going to happen. So, rather than cry in our milk, we need true leadership that can address such issues as rising CO2 and sea levels, along with the very real potential of the return of a Little Ice Age.

The sad truth is that very few individuals, not matter where they happen to live, are willing to give up very much. They also have a hard time getting worked up over something that might happen to their children's children. And, if everyone really faced the truth, they'd know that key survival issues like potable water availability will very likely drive mass migrations of billions in the not very distant future. [Please see the News Week titled 'The World Will Soon be at War Over Water'!]

Then again, that's all assuming that we don't all blow ourselves up in a nuclear holocaust!
Posted by Dan Owen at 10:39 AM