The Flu Season is upon us! 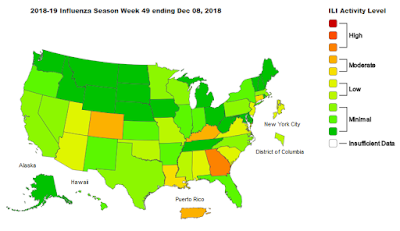 Even as the official beginning of the Flu season was back in November, there just hasn't been much to report as most states were seeing only sporadic of ILI or Influenza Like Illness cases being reported. That was as of the latest report put out by the CDC on December 8. At the time, the vast majority of viral infections were of the H1NI Type A variety. Following in a more scientific description:

I was unfortunate enough to contract this bug back in late September, and that was right before I had gotten a shot. I can attest to the fact that this is not a very nice bug to get as I was laid up for over a week, before then contracting pneumonia. The whole ordeal took about four weeks to recover from!

Today (December the 15th), some early reports indicated that not a few states were moving from sporadic and low to moderate and even higher levels of infection! And yes, it's not too late to get a vaccine shot at your nearest clinic. And, the good news is that this years 'blend' turned out to be just the right 'medicine'! Remember, after getting your shot, that it will take up to two weeks before your immune system is geared up to fight the real thing. And while getting this vaccine may not keep you from catching the flu, it will certainly take the effects and symptoms down a few pegs!
Posted by Dan Owen at 11:20 AM