Way back in January 2006, the United States launched a small probe named New Horizons off the planet and onto a trajectory that allowed it to first visit Jupiter in February of 2007, doing a fast swing around and then heading for an encounter with Pluto in July of 2015. Had the scientists left it at that, the earth might have been spared some problems!

But no, a group of them got it in their heads to point the little craft out towards the Kuiper belt, a region of the solar system beyond the orbit of Neptune, believed to contain many comets, asteroids, and other small bodies made largely of ice. And, as it turned out a warlike tribe of robots soon to be known to humans as Stoolites! Why Stoolites, you might ask. Mainly because that's what they call their little retched piece of rock - Stool! And while scientists still prefer the term Ultima Thule, that only caused those robots to get even more agitated after communications were firmly established. Then, the following message was received on December 28, 2018 – just a few days before the probe was scheduled to whiz by the rock at a distance of 2200 miles....

[Biotic organisms of [unpronounceable]. We have seen the incredibly large 'missile?' you have aimed at Stool, but with such very poor accuracy, that it is sure to miss us. You dare to attack Stool? We will respond by launching the entire Stoolian battle fleet which numbers in the thousands with orders to annihilate your pathetic tiny ball of water and rock!]

As you might guess this threat was taken very seriously, until that is, the Stoolites also sent them a picture of one of their space battle cruisers along with a detailed specification of its armament, size etc.

After doing some math, they determined that each craft was about 0.0625 mm in length! (See mock up of scaled-to-size craft below right). 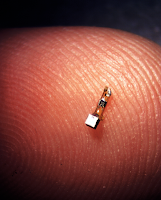 'Hmm', pondered one scientist. 'It would seem that the Stoolites may be a bit myopic and they're definitely somewhat tiny!'

Another scientist looked up at him grinning. 'Do you think we should sue for peace? I mean their entire armada might just fit into a small salt shaker!' (The scientist then commenced rolling on the floor laughing).

Meanwhile, a lone robotic Stoolite stood at the helm of the flagship Fartenstark, as it headed at flank speed for the earth. One of his metal tentacles slapped the floor plate in anticipation. 'Boy', he thought. 'Will they ever be in for a surprise...'
Posted by Dan Owen at 11:15 AM