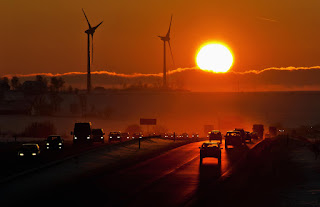 Recent articles, published by the likes of the Washington Post, concerning Global Warming caused by CO2 levels have caused me to laugh out loud on more than one occasion! (While it is true that carbon dioxide levels are rising a tad, that is not a bad thing! It's actually a good thing as those self same levels have been increasing the total biomass on the earth at a rate of 5% per decades)! What that means to us is more growing opportunities for agriculture over longer periods of time at higher latitudes! With the resultant excess foods being used to feed a hungry world at cheaper prices.

Something we really do need to become aware of would be Global Cooling. That would not be a good thing for the over seven billion people walking around as of this post! (Any form of Ice Age would be catastrophic for all involved with large scale forces at play that could make that occur being many and varied. Please check out an earlier post titled; The SPC theory of a trigger for the next ice age)!

In another well written article put out by the Learning-Mind.com, the forces I had listed in my article, (CO2 and solar insolence) can work with synergistically other 'forces' that can and do affect our climate, both in the short term and long term:
As if that were not an impressive enough list, there is always the potential for seismic plate activity including vulcanism that can and does release very large amounts of various gasses such as carbon dioxide, sulfur dioxide, hydrogen sulfide, hydrochloric acid and carbon monoxide. It should be noted that many of these so-called 'forces of Nature' tend to lean the planet in the direction of cooling, not warming.

Sadly, the drivel being put out by Left-leaning media outlets like the Washington Post are done solely to push a Progressive narrative onto the masses ( in my view) and really have nothing to do with any actual science.
Posted by Dan Owen at 10:51 AM