USDA and FDA needs to step it up on food labels! 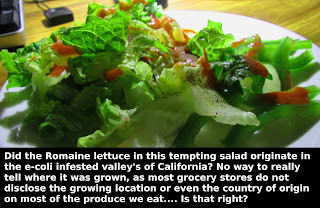 There are many strains of the bacteria Escherichia coli (E. coli) and most of those strains are harmless. As a matter of fact many of these guys live in the intestines of healthy humans and animals.You might even say that they are ubiquitous on planet earth. That said, a few varieties of E. coli cause disease by producing via their production of the Shiga toxin. The bacteria that make these toxins are called "Shiga toxin-producing" E. coli (STEC), and the most commonly found STEC in the United States is E. coli O157:H7. If you happen to be unlucky enough to ingest these bad dudes via infected produce or water, you could develop severe symptoms, especially if you are a young or elderly person.

In general the USDA and FDA do a superb job in insuring that the food that we Americans consume is safe. But, outbreaks can and do happen. And, when they happen, locating the geological site of the source infection is time critical. Then, once the source is known, it is equally important for them to spread the word far and wide. And that, sadly is not what happened in the latest Romaine lettuce outbreak in November of 2018! Part of the problem in finding the source stemmed from the fact that much of the produce consumed domestically is not very well labeled as to where it was grown or, sometimes, even what country it came from! Only the local grocer would likely even have that information on hand. The consumers, well, they are pretty much left in the dark. That shortsighted approach to National safety needs to change....

I would like to see better and more effecting labels for all our produce and fruits! Will such a program be difficult - yes, most likely. But it is needed? Ask any of the 43 who became sick, recently, about that!
Posted by Dan Owen at 11:01 AM