Has Opportunity bitten the dust - literally? 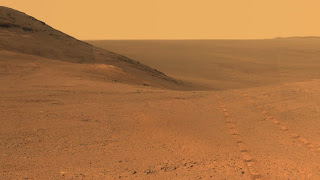 Mars - The last picture from the 15 year old Mars Opportunity rover was taken of its own tracks. It's been silent since June 10, a casualty of a mega-dust storm that encircled the Red Planet and led to a halt of the rover's operations at Perseverance Valley.

The hope is that seasonal winds could increase, over the coming weeks at Opportunity's location on Mars, possibly resulting in dust being blown off the rover's solar panels — and perhaps allowing the six-wheeled robot to finally wake up. If that does come to pass, plans are in place to continue to look for a 7-11 with English speaking personnel.
Posted by Dan Owen at 7:57 AM