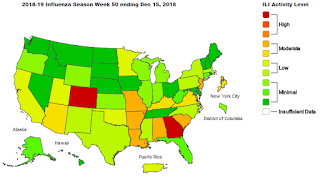 As a disclaimer, I only pretend to know what I'm talking about. That said, there were two variants of the flu virus circulating around the country as of the latest December 15 report from the CDC. The most prevalent was Type A H1N1/Michigan/2015 bug that has been around for some years. And while it's not a very nice bug, it can cause high levels of morbidity and is contagious as hell. That virus is seen in most of the US excluding the southeast where we find a much more interest mix known as H2N3/Singapore/2016. This little bundle of snot is much more active in terms of anti-genetic drift ability and is one I would want to watch were I very smart. 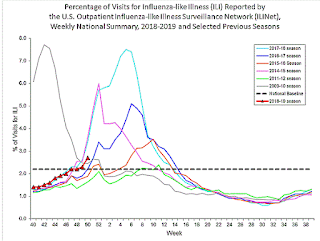 The rate of reported ILI or influenza like illness across the US did jump up over the average US baseline and looked to be sort of following the sort of curve we saw last season. Note the rather wacky season we had in 2009-10! By Christmas, the flu season was basically over. That was not going to be the case this year with the good news being that the vaccine looked to be very effective.
Posted by Dan Owen at 6:27 AM