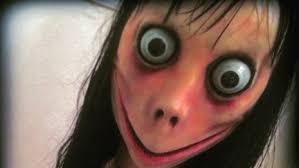 A children's 'game' starts when a person adds a phone number belonging to “Momo,” a woman with large eyes and a sharp grin. The participant is then sent various challenges before ultimately being told to kill themselves. If they do not, they are threatened with a curse.

I was totally against this sort of nonsense for kids, but felt it might have merit for oldsters like myself. To that end, I invited two other older people to play, with me being the big MOMO!

My first text message challenged both of them to send me all their money.

My second challenge was for them to kill themselves, less I unleash the dreaded McDanO Curse.

So far, I haven't heard back from either of them. Wait a minute, there's a squad car pulling up outside. Perhaps this is some sort of response!
Posted by Dan Owen at 11:23 AM