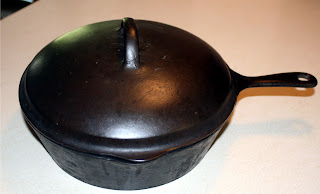 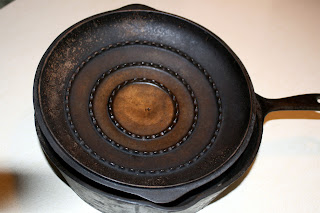 This is a very old cast iron skillet with lid that belonged to my grandmother and which I think is at least 100 years old. It weighs in at 11.2 pounds! The closest I could find on the internet was a Wagner #9 extra deep skillet that the seller was asking over $200 for. This skillet had markings that clearly identified it for what it is. My piece does not have any discernible marking other than a 1+ on the inside of the lid. Any marking that might have been on the bottom have worn away. I would love to hear from anyone who might have an idea as to its make and year of manufacture.
Posted by Dan Owen at 10:17 AM