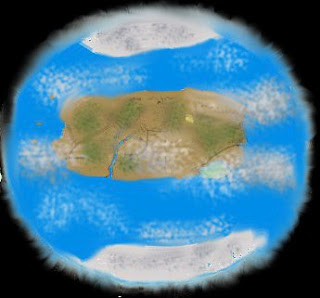 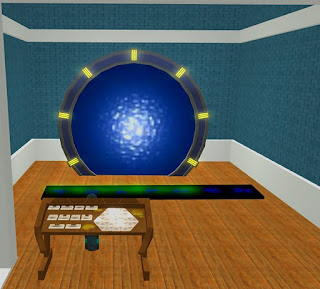 OK, Nad thought reflexively, so things are not looking so good on planet Earth! Perhaps they were even going to blow themselves up! Thankfully, other than the one SIDT (Spacial Inter-Dimensional Tunnel) discovered in the city of Tonne, we live very very far apart. Actually, Nad reminded himself, the Nodian solar system is located in a separate cluster of galaxies and is roughly about 10 billion light years away! So, we're not exactly neighbors, he thought. And that was a good thing, because there was no space program to talk about other than... 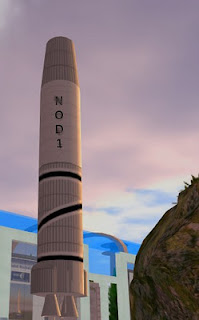 At some point, back when I was only a child, a group of scientists had gotten together and developed a rocket. By most standards, this was a most primitive vehicle comprised as it was of solid fuel boosters that could just barely do the job of lifting a ‘space module’ up into orbit around the planet. In the early part of the year 3040, they did manage to get the job done, but just barely as the thrusters were poorly designed and cut off too early. 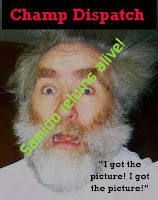 After orbiting the planet just three times and getting only one blurry picture, the rocket module (complete with a dazed man by the name of Samido strapped inside) made a perilous reentry with the main parachute opening only at the last possible minute. By the sheerest of luck, the module was located where it landed close to the shore south of Champ and wonders of wonders the Samido was alive and unscathed. At least physically that is. Samido’s state of mind was another thing entirely! Rescuers could not help but notice that his well known jet black hair had turned white! Also, Samido had taken to drooling a bit. In due course, the poor man was ceremoniously lead away to live in a ‘controlled environment’ for possibly the balance of his life.

After sifting through the wreckage and locating the camera, they found that in fact, the film did have one frame exposed and by the Saints Almighty, it did show a blurry image of the planet. They were ecstatic and immediately declared a National Samido holiday. However, after three days of celebrating the populace had forgotten what the heck they were celebrating, while the scientists had forgotten all about rockets in general. Such is the way of things in Nodia. 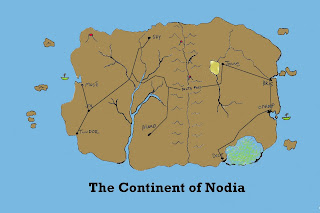 Perhaps the only good that ever came out of getting that space picture was the fact that a map of the main continent was eventually produced; a crude one, but a map none the less. As is plainly shown, there are not many formal cities on Nodia. Part of the reason for that is the fact that the population had stabilized at just under 300,000 with many of those preferring to live on small farms scattered about the countryside. The roads (if you can call them that) which connect the cities together, were only built after many centuries and even today they are not much more than dirt paths. The main mode of travel for the population is by simple cart or bare foot…..
-------------------------------------
Nad sighed and put the report back into the drawer. There was a lot more to the story, but he really wasn’t interested in reading any further. He needed to get to the capitol city of Champ and let the council know what was going with the warring nations of earth. At the very least they would need to make a decision concerning the tunnel. Should it be left open or should it be closed. Actually the proper question to ask was could it be closed. Nad didn’t think anyone really knew. It was a device that had been discovered just a few years ago in a cave below the Temple of Ichis in the city of Tonne. Perhaps, if the Council of Elders was willing, they could travel there to see what could be done.
[to be continued]
Posted by Dan Owen at 4:12 PM