Whatever happened to the Swine Flu? 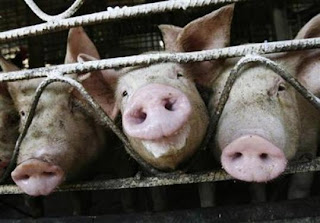 In 2009, the swine flu virus infected an estimated 60 million people resulting in 270,000 hospitalizations and 12,500 deaths. Since then, it pretty much dropped off the radar scope as far as most Americans were concerned.
But where did it go?
It turns out that this potentially deadly form of Influenza known as A(H1N1) is spending its time hanging out in both wild and domestic pigs in Central Africa. And, that has scientists worried that a new pandemic might be just around the next corner.
Scientists from UCLA in California, recently went to Cameroon to determine whether the H1N1 virus was present in African livestock. What they discovered was disturbing. Random testing turned up that almost a third of the pig were or had been harboring the exact same flu as was seen in humans during the 2009 outbreak, And although the virus has been detected in livestock in other countries, this was the first evidence of it in a location showing contamination directly from man to pig.
According to Thomas B. Smith, director of UCLA's Center for Tropical Research and the senior author of the research. "Africa is ground zero for a new pandemic. Many people are in poor health there, and disease can spread very rapidly without authorities knowing about it."
In America and other developed countries, safeguards are in place that prevent the spread of contagions from man to animals. This is not the case in places like Africa, where no such safeguards exist, and that has flu watchers worried.
Posted by Dan Owen at 9:48 AM