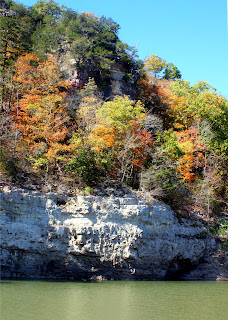 Every so often, as fall progresses inexorably into winter, there are some days when God smiles and blesses this land with a parting kiss of perfection. Then, like an unwanted second act, Old Man winter arrives and applies the thumbscrews that is winter here in southwest Missouri!
On this date, I drove down to the non-camping side of Shadow Rock Park located in Forsyth Missouri to sit for a little while, and to collect my thoughts. The day was so nice it seemed almost surreal; temperatures in the mid seventies, clear skies and light winds made the sort of day you’d like to bottle up and just keep close to your heart.
I’d picked a shelter that was close to Swan Creek and marveled at how well the locals had cleaned up this place after a horrific flood had left it inundated with flood water for all of the summer. After the waters had finally subsided, city workers and volunteers came in and made it ship shape once again. Quite a contrast to the federally run park called River Run just across the water. A park which is, even now, overgrown with weeds while still bearing the scars of fallen trees and damaged campsites. (A microcosm view of the ills permeating Washington perhaps)?  Uck! As I sat there, I spied a couple of fishermen or fisher-women, I couldn’t really tell, who were wandering up and down the shore with a folding chair in one arm and a rod in the other. One of them wandered one way, while the other went the other way and then, after a while, they both came back together. Obviously, I mentally surmised, a pair who were out hunting for the savory flesh of a fish with which to grace their evening table.

As I watched them, I ventured a guess that had I been at this very spot back in 1932, I would have seen much the same image. Civilizations may come and go, but those who fish are forever.
Posted by Dan Owen at 5:50 PM