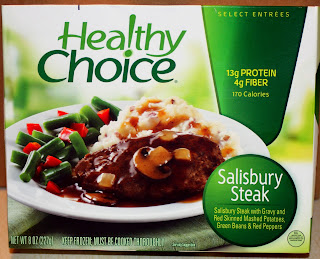 Whenever I hear the word ‘entrée’ lately, I think of small portions made for a midget's consumption and I wasn’t disappointed with this meal in that respect. At only 170 calories, how could there be much of anything in the box?

Healthy Choice’s webpage invites one to ‘Explore Uncharted Flavor’. OK, I’m certainly game for that. (Unfortunately, the last time I personally went for some 'uncharted flavor', I was arrested on a morals charge in Bangkok! But, that's a story for another time)!

They also offer a coupon that was valid at the time of this post (Sept 2011). The coupon is good for a buck ($1) off three meals. This entrée cost me only $2.59 at a store in Forsyth Missouri. Since the weight of the food is listed as 227 grams, I figure I’m paying a penny a gram. Is that a good thing or a bad thing? I dunno, you tell me!

OK, so if you've read my reviews on other dinners you'll know that for me, it's all about the taste. But, there are some other categories to also consider if I’m going to be fair and I’ve listed six here. All are on a scale of 1= disgusting to 10 = multiple orgasms (no meal has ever come close to a 10 btw).

Comments: The bottom line here was amazement and some awe on my part. Now, mind you, the portions were small, but for all that, very tasty! (I also cheated by using a piece of bread to act as a sop for the gravy and mashed potatoes which made this deal a nice treat)! 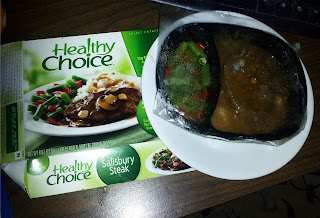 For it being such a small meal, the great taste really made it worthwhile to eat.

Feel free to grab a few of these meals for some late night when you don’t what to overcharge your body.

At right, the picture on the box and the actual product were not what I had envisioned! Darn those advertising people!
Posted by Dan Owen at 7:26 PM