Forsyth MO. - Other than one rather well written article by Jann Clark that appeared in the September 28 edition of Taney County Times and perhaps a few posters that were displayed at area businesses, little was apparently done to promote the Harvest Moon Car and Craft Festival that held on Saturday, October the first!


I'll admit that for someone who tries to make it a habit to know what's going on in his small town of Forsyth Missouri, this deal came to light at only the last minute! When I heard about it on the morning of October 1, I made an effort to try and locate any mention of the even on the net. Nada. Not at the Chamber site, not at the City site and not even at the KRZK site that is normally pretty good about advertising local events!

When I arrived at the event, two things popped into my mind; 1) there were a ton of cars on display along with perhaps forty or more vendors along with music and food and 2)) there were not enough people! This once a year event offers a great chance for the local folks to get out to see and be seen. The weather was also picture perfect; sunny skies, light winds and temps in the 70's. So, what the heck was wrong? My take on the low turnout was twofold; 1) inadequate advertising and 2) zero porta-pottie. If you had to go, you had to use the local church and stand in lines. This presented a real problem for any vendor that occupied a spot by themselves and was the almost universal gripe I heard from everyone I poled. Perhaps the organizers will do it better next year... 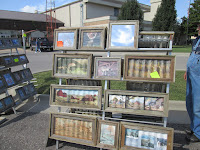 On a more positive note, the people who did show up seemed to have a good time. I heard that the food was great and I even had a chance get up and close to some of the most fantastic autos I've ever seen.