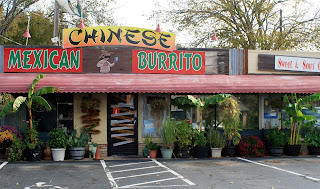 OK, so the owner didn't have much imagination when it came to naming this venue, but at least it's descriptive....

Were it not for a friend of mine, by the name of Daniel Danielson, I don't think I ever would have ventured into this venue located at 15709 US-160 in Forsyth, Missouri. Frankly, I've never been a big fan of Chinese styled food, but I do admit to enjoying some Mexican cuisine from time to time. So, it was, I stopped there to meet and dine with a friend named Dan, on what had been a spectacular month of October, where we enjoyed balmy weather for much of the month! 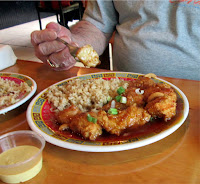 The full name of this eatery is Chinese-Mexican-Burrito. And, as you can see from the photograph, they like to have a lot of foliage displayed in the front. I guess if I were a dog, I'd enjoy that feature a lot. I'm still not sure, however, what happens to all these plants come wintertime??

In general, the reviews I've read on Google have been positive. So that was encouraging. One thing I was also sure of is that the seating area is limited (~20) and it pays to get there well ahead of the lunch hour rush if you want a good table and desire prompt service. 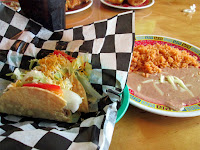 As it was, I arrived on a Wednesday at about 11 AM and already there were a few patrons there for an early lunch. The weather was cloudy but nice at about 80 degrees. My partner was already there and had ordered some thing that looked rather repulsive. As an ex Navy Seal, he'd spent some time in Asia and likes that sort of food. Me, I wanted them thar Tacos!

So, what did I think of the place. Well, it was clean and the service was excellent. My tacos were simple, but good if just a bit pricey. Still, not a bad venue to check out!
Posted by Dan Owen at 12:43 PM