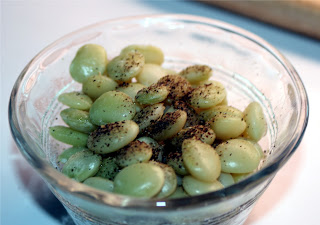 As a food source, Lima beans were known to be cultivated more than 7000 years ago making them rather ancient! As they can stand the heat better than most beans, Lima's are often grown in tropical areas like Africa and Asia.And, I've found either you like the taste or you don't.

Every 100 gram serving (~ half a cup) delivers about 114 grams of calories and will fit nicely as a side for most any meal. I like to buy them frozen in one pound bags in the frozen food isle. They cook up in just a few minutes and cost just a couple of bucks!
Posted by Dan Owen at 7:57 AM