Tabby's star unlike any ever seen! 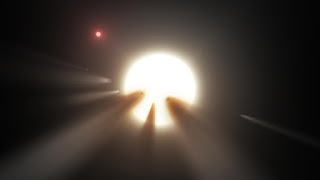 The steady brightness change in KIC 8462852 is pretty astounding," study lead author Ben Montet, of the California Institute of Technology in Pasadena, said in a statement. "Our highly accurate measurements over four years demonstrate that the star really is getting fainter with time," Montet added. "It is unprecedented for this type of star to slowly fade for years, and we don't see anything else like it in the Kepler data."

KIC 8462852 hit the headlines last September, when a team of astronomers led by Tabetha Boyajian of Yale University announced that the star had dimmed dramatically several times over the past few years — in one case, by a whopping 22 percent.

These brightness dips are too significant to be caused by an orbiting planet, so scientists began suggesting alternative explanations. Perhaps a planet or a family of orbiting comets broke up, for example, and the ensuing cloud of dust and fragments periodically blocks the star's light. Or maybe some unknown object in the depths of space between the star and Earth is causing the dimming.

The brightness dips are even consistent with a gigantic energy-collecting structure built by an intelligent civilization — though researchers have been keen to stress that this "alien megastructure" scenario is quite unlikely.

Montet and Simon said they don't know what's behind the weird behavior of Tabby's Star, but they hope their results, which have been accepted for publication in The Astrophysical Journal, help crack the case eventually.

"It's a big challenge to come up with a good explanation for a star doing three different things that have never been seen before," Montet said. "But these observations will provide an important clue to solving the mystery of KIC 8462852."

Even the folks at SETI are now focusing more attention on this strange beast in the sky!