Dieting, old age and why they don't work! 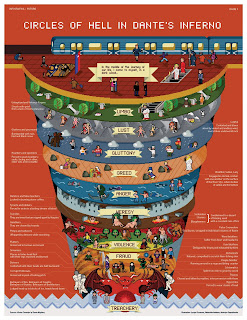 Early most every morning, I crawl out of bed, muscles creaking in protest and head for the bathroom scale. As a practicing masochist, I like to give myself a jolt of depression by watching my inexorable weight increase. Over at my desk, I have a piece of graph paper that definitively shows my weight will top 500 pounds by 2020 if I stay the current course! Swell.

And, it's not that I'm not trying to lose weight. I've done every diet known to man, but always get the same results. Hey! Isn't that the very definition of insanity? The only diet I've ever found that worked, even remotely well, was the one where I cut down on my portions and actually went out and exercised. WTF?

So, here it is 2016 and I have become truly out of my mind, as I have embarked on yet another extended period of; denial, depravity and tiny little plates of food. And, this diet requires me to actually move from time to time! Some mornings I wonder just what level of Dante's Hell I happen to be standing on. (It was Level 3! Duh.)

So here's the real deal, I discovered after doing some research. It appears that once you get over the age of 50, your metabolism begins to play games. For instance, the less food you eat, the slower it gets. So, even though you're starving, you're not losing any weight! I think another WTF is called for here! Then, if you do sneak in a decent meal, that old body of yours roars into action converting every gram into fat! I've actually be able to gain two pounds after eating only a pound of food! I called Science Magazine about my new found ability to create matter our of nothing, but they hung up on me...
Posted by Dan Owen at 10:36 AM

Email ThisBlogThis!Share to TwitterShare to FacebookShare to Pinterest
Labels: Dieting after 50, Forsythkid, satire