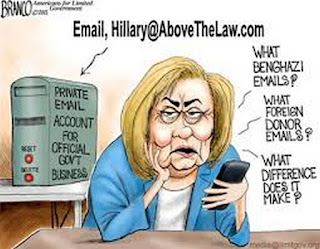 By the time of this post (Oct 29), most everyone was aware that the FBI had reopened the email investigation concerning Hillary Rodhammer Clinton. Like a bunny rabbit caught in a trappers snare, it seems she's having trouble hopping away from this one. The thinking men an women of the nation are likely to be getting rather tired of her antics by this juncture in time.

But, what's much more fun to watch is the media! Outlets like CNN, MSNBC, ABC - well, you know who I'm talking about, are all crying foul! as one they are trying desperately to cover this up as something that really had nothing to do with her personally. That there was about the pervert Wiener and his girlfriend, not about good old law abiding Hillary. No sir! No way!

So, now we all get to watch out favorite channel to see which way they spin the truth in to some all new origami shape that has little bearing to reality.
Posted by Dan Owen at 12:48 PM