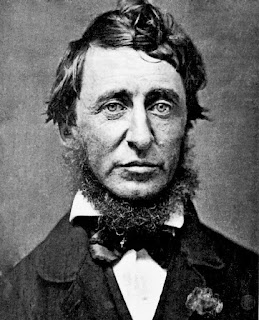 In 1849, Henry David Thoreau wrote a paper titled 'Resistance to Civil Goverment'. And, while they may have spelled the word 'government' differently back in those days, never have such words had such timely import! Today we refer to the intent of his essay as the practice of 'civil Disobedience'.

Thoreau begins his paper with, 'I heartily accept the motto, "That government is best which governs least"; and I should like to see it acted up to more rapidly and systematically. Carried out, it finally amounts to this, which also I believe—"That government is best which governs not at all"; and when men are prepared for it, that will be the kind of government which they will have. Government is at best but an expedient; but most governments are usually, and all governments are sometimes, inexpedient. The objections which have been brought against a standing army, and they are many and weighty, and deserve to prevail, may also at last be brought against a standing government. The standing army is only an arm of the standing government. The government itself, which is only the mode which the people have chosen to execute their will, is equally liable to be abused and perverted before the people can act through it.' [I supplied the bold type]

Those words really struck home, for me. As a Nation, we are preparing to elect a known crook and congenital liar to the land's highest office, in my opinion! When Hillary Rodhammer Clinton takes the pledge of office on or about January the 21st, the words she speaks that day will be meaningless other than perhaps to represent one of the final nails in the coffin containing the remains of a once great Republic.

Thoreau then goes on to state that it is never a government the propels a country to greatness, but rather the character of the masses, contained therein, that gets the job done. In his words, 'Yet this government never of itself furthered any enterprise, but by the alacrity with which it got out of its way. It does not keep the country free. It does not settle the West. It does not educate. The character inherent in the American people has done all that has been accomplished; and it would have done somewhat more, if the government had not sometimes got in its way.'

I doubt that old Henry would have believed the horrific state of this country in 2016. Back in his day, the 'structure of control on the Delaware' was vastly less complex. The cancerous tumor, it would it would one day become, only the smallest mole on the butt of a then healthy Nation. Yet, even back in the 19th Century, Thoreau wrote, 'All men recognize the right of revolution; that is, the right to refuse allegiance to, and to resist, the government, when its tyranny or its inefficiency are great and unendurable.'

Thoreau, and the people of that time, fully understood that things could go south in a hurry. Now, 167 years later, they have.
Posted by Dan Owen at 9:30 AM