Chicken Noodle Soup on the fly! 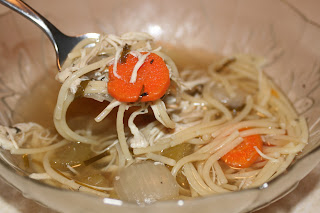 One afternoon recently, I looked in the freezer for something to defrost and eat when I spied one lone chicken breast hiding in a frosted baggie. God only knows when I put that guy in there. Time for it to come out and join me for dinner. Invitation sent and accepted. The fool!

The thing was, I had no idea of how to work a single breast into a meal. So, I went to the net to Goggle myself out of this quandary. Quickly I found an interesting recipe that also looked rather good, it being a little cool outside and all. Chicken noodle soup was the ticket for today!

This recipe could not be easier to make (something that certainly befits a lazy man such as myself). All you need is one chicken breast (had that), a couple of carrots, a can of chicken broth, a couple of stalks of celery, a wedge of onion and a few herbs to cure what was ailing me at this particular time; hunger!

While this recipe calls for a slow cooker, I’m sure it would also work in a regular pot. All you have to do is chop up the veggies, add the can of broth along with a can or so of water and you have this meal deal pretty much licked. Oh, about that chicken breast!  It just gets thrown right on in there too! As far as herbs go, you might want to consider adding a clove of minced garlic, a dash or two of thyme, some salt and pepper and you’d be bout done. The only other ingredient required is some pasta. All I had was some thin spaghetti which I broke into little pieces and held on the side.

I cooked this on low for six hours, then fished the chicken breast out while adding the spaghetti (about 1/4 cup of broken noodles) at the same time. At the last minute, I decided to run out to my garden where I got some chives to be chopped and tossed in also. That old chicken breast should be allowed to cool and then shredded with a fork. Re-introduced this to the slow cooker which can now be set to high and allowed to go for another forty minutes to an hour. Remember that this is one dish where the noodles can be allowed to get a bit mushy. If they’re too al dente, it just doesn’t taste right!

At the end of this time, you will have yourself a great bowl of soup that is guaranteed to cure just about anything that ails you.
Posted by Dan Owen at 4:16 PM