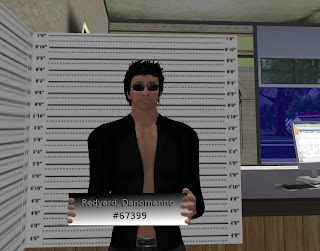 AP - Rockcliffe University, SL - A perp going by the name of Danomanno Redyard has been arrested in connection with a series of break-ins in and around Rockcliffe University. Seen here in a just released AP photo, Mr. Redyard had few words for reporters other than his assertion that the doors to the businesses he invaded were all unlocked. Sergeant Bill Bob Dumbles of the Rockcliffe police who assisted in the assist was quoted as stating that Mr. Redyard was a ‘pretty big fella’ who resisted arrest by ‘flying’ from the spot where he was later apprehended. This reported assumes the Officer Dumbles meant to say ‘fleeing’ and not ‘flying’. Mr. Redyard's wrap sheet indicated that he has been arrested on numerous occassions for offenses including; pandering, man acts, homus infildelius and building code violations too numerous to mention. 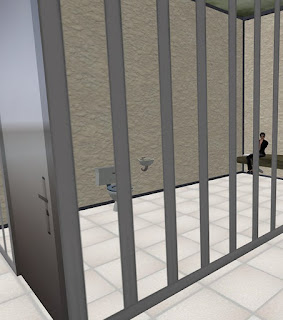 Mr. Redyard is scheduled to appear in the Rockcliffe Circuit Court sometime in December for arraignment. Meanwhile he is cooling his heels in the local jail. Our reporter on the scene, Jessie Kwet, was lucky to get a picture of Mr. Redyard as he languished in a jail cell.
Posted by Dan Owen at 3:49 PM