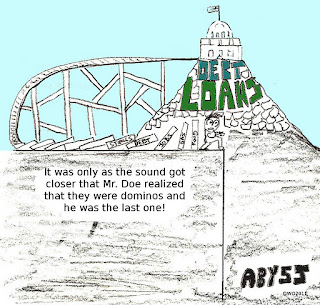 As a society, we can’t say we never saw this coming. And, please don’t crank up the blame machine. It wasn’t the Democrats or the Republicans that brought down the Republic, it was us. We the People. It was greedy, crooked men and women who all took a turn at the helm of the Good Ship America and who each in their turn, made sure she was headed towards the rocks. I can’t see any other way of looking at this. Both sides ended up spending 300 million into the poor house and as of this writing in late 2011, they are still hard at it.

Now, when there is little left to be done, the People are beginning to stir. Perhaps it was the loss of a job or getting kicked out of their home or even being unable to afford food that has captured their attention. I don’t know. What I do know is that for all extents and purposes, it’s all over but the shouting. America is destined to fail and when she does, so will much of the civilized world. What will be left will be something similar to the Dark Ages where life will once more become brutal and brief. Where strength and not intellect will rule and where just a few will continue to live in grand style on the backs of billions.
Posted by Dan Owen at 6:07 PM