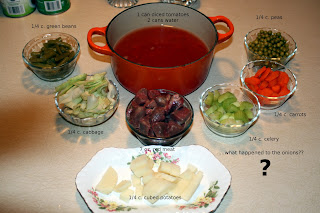 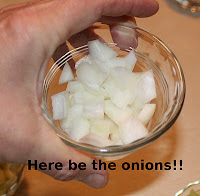 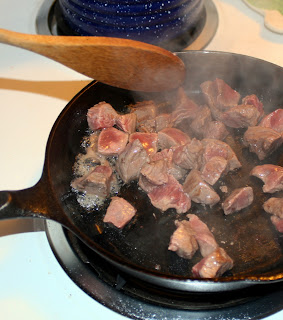 Note: if you have a hard time with proportions, just remember that most all the ingredients to make 2 quarts of soup are about 1/4 cup! I'll begin this dish with a small amount of oil at the bottom of a 2 quart pot over medium heat. Add the (room temperature) cubed beef and sauté for a few minutes until brown and then dump into the pot. Next, add a can of diced tomatoes along with 2 cans of water. Stir, bring to a brief boil, then reduce heat and allow everything to come to a slow simmer while you prepare the veggies.
The Vegetables
Prep anything on the counter that looks like a vegetable, making sure to cut them all into fairly equal sizes as this will help to ensure even cooking. Everything goes in with the exception of the cabbage, peas and green beans. I'll hold those back for inclusion in the last thirty minutes of cooking!
Houston we have a problem! 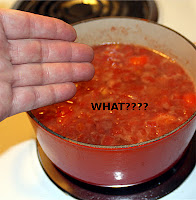 OK! Anyone can make a mistake! My pot only has a few of the ingredients and it already looks almost full! What's going on here? Ah, it turns out this is a 1 1/2 quart pot not a 2 quart one. My bad! No real biggie. I can elect to just move everything to a larger pot OR I could throw it into a SLOW COOKER. Think I'll just go ahead and do that! Slow cookers are cool because you don't have to watch them. Since it's a holiday today, that means I'll have that much more time to watch parades and football!
The Herbs 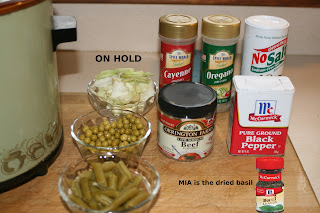 Now, here is where things can get tricky, depending on what kind of sly culinary fox you are. Herbs contain volatile oils which means that the earlier they are introduced to heat, the more likely their flavor (and smell) will be lost. So, use your judgment as to when they get introduced into the mix. I like to wait until the last thirty minutes of cooking before adding the garlic, oregano and basil. The other guys (pepper and salt) can swim pretty much on their own! Watch out for that cayenne powder! A very little bit of this stuff will affect the overall heat of the finished soup!
That’s it! If you're using a pot on the stove, simmer the soup covered (mostly) for about an hour and a half over low heat, sampling the result anytime after the first hour to judge for doneness. If you're using a slow cooker, leave it at low and cook for 6 to 7 hours. I like to fish out a carrot slice as a good indicator of just how close to the finish it is….
A word on nutrition
Any basic homemade vegetable beef soup is an immune system strengthener to the ninth degree! Not to disparage the ‘chicken soup mindset crowd’; a good vegetable based offering like this will blow the ‘chicken lick’n homeies’ completely out of the water, nutrition-wise. So, if you find yourself in the ‘stressed out holiday season, make sure to keep a batch in the fridge for frequent therapeutic use. And OK yes, a batch of chicken soup wouldn’t hurt to have around either!

A final word about making this recipe. It's a whole lot simpler to do  than I think I portrayed it here.  If you find you're in a hurry with limited time to mess around, just throw everything all at one into a slow cooker, turn it onto low and get out! Shouldn't take much over ten minutes that way!
Posted by Dan Owen at 10:34 AM