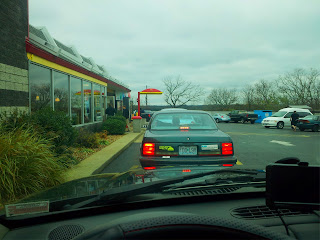 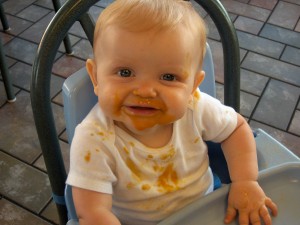 Fast food emporiums are as common as street lights. They exist on most every corner of large cities and even small towns like mine generally support one or two. From my standpoint and speaking as a germaphobe, they are also to be treated as weapons of mass destruction. Actually, any place that combines food with high numbers of patrons qualifies as a potential site of germ warfare entanglement. And, that’s even more true if you add the child factor to the equation. To me, the term ‘mobile petri dish’ pretty much defines any kid under the age of 5.  If they’re not busy crawling around on the floor, they’re sticking their fingers on and into every surface they possibly can! With each tactile exploration, new germs are picked up for a free ride. Hey! Is that ankle biter heading for MY table!?! Did he just sneeze? You can see, then, why I’m so paranoid when going to an eatery where children are allowed!
The thing is though; I hate the drive-through, preferring instead a nice sit down meal experience. Also, I will admit a certain fatal addiction to eating a Big Mac now and then. So much so, that I’m willing to brave the dangers of rampant infection to have one. But, just because I go to these places does not mean I have to act stupid as well. I take due precautions to insure my visit will be a germ free one.
My entry protocol at off hours only, please
Whenever I go to a place like McDonald’s I try to do so at an off time. That would be really, really early for breakfast and shortly after 11 AM for lunch. I absolutely never go to a fast food joint any later than 1PM as they tend to really get ‘junked up’ prior to the next morning cleaning efforts. 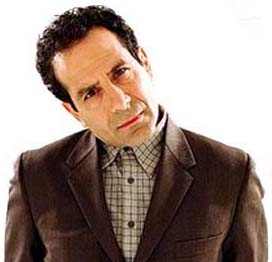 When approaching the order counter, I make it a point to check anyone who is already there. Was that guy sneezing? Does that lady have red puffy eyes? This candid inspection also includes the staff who are preparing my food. Sometimes I’ve had to lean way over the counter to see them in the back of the food prep area. (I know I’m beginning to sound like the actor that played Monk on TV). But, if I have even the slightest concern, I’m out of the place in a flash. “Hey! Where’d he go?”
Acquiring your order in a safe manner
Whenever you pay for something with currency, you're inviting all sorts of nasty germs as paper and coins are exchanged. So, I make it a point to know what I’m going to spend and to carry enough singles and change to exactly cover the cost. That way I can pay an exact amount and not have to get anything back! Also, when I’m at the counter, I make sure to never actually touch the surface. I first go, instead, over to the condiment section and grab a few napkins first before even getting in line. Then, when my tray is ready, I can use a napkin to grasp and carry it to my table. Who da man now?
The evil condiment counter 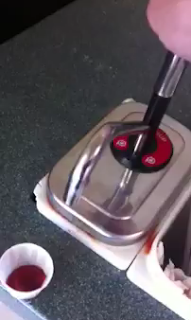 Invariably, I will order something that requires filling at the condiment center (a coke) or a tiny basket of ketchup (a subject of a future blog). The coke is really no big deal because no one ever touches the spigots (do they?). However, the ketchup dispenser is the focus of all sorts of hands (both young and old) all day long. (I can just imagine what sorts of germs are on that thing)! So, taking a clean napkin, I use it over my fingers to prevent me from of actually touching the pump handle. See, problem solved.
Once at the table never drop your guard
Now that I had all my food together at the table, I try and make darn sure not to touch the table itself. I’m sure that the staff must wipe them down, it’s just that in twenty years of eating at places like that, I’ve never observed it actually happen. One time, I went as far as to bring a can of Lysol with me, but after spraying down the table, I was visited by the management. “Hey you got a problem, Bud?” OK, so no more cans of Lysol. But, it would be nice if they had those wipe stations like they do at the grocery store.
I hope you find these pointers useful and if not that, at least a little entertaining!
Posted by Dan Owen at 2:00 PM