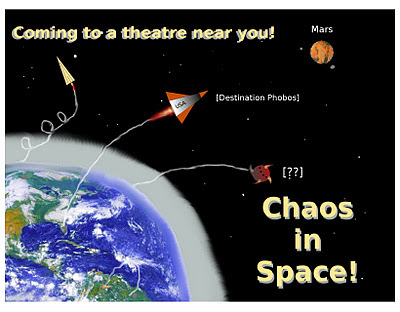 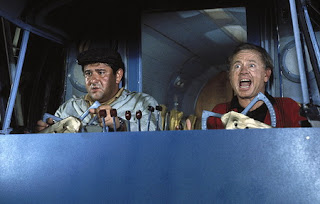 Imagine the hysteria that would result worldwide if the little explorer mission to a Martian moon dubbed Phobos-Grunt was to discover that the moon known as Phobos was actually artificial! In what I think would be very similar to the movie ‘It’s a Mad Mad Mad World’, everyone and his uncle would be racing to space to be the first to claim an extraterrestrial prize of stupendous import.
President Obama would quickly ascertain on national TV that he has always supported the NASA Space program and would be heard saying ‘let me be clear on this’ numerous times. Suddenly the national debt would be all but forgotten as America quickly geared up for a manned trip to that far away planet.
Other nations including Russia, China and even the Arabs (remember the movie?) would endeavor to ‘get out there’ with all possible haste. Praise Allah! In secret meetings, nations would plot on how to disable other country’s crafts while on the way. Yes, it would be Stars Wars in the flesh! Well, a watered down version anyway!
Months later, after spending trillions of dollars, up would go the rockets in a mad dash for the alien prize. Some would life off in graceful splendor while others would not liftoff at all. CNN and the rest of the media would have a field day with ratings going through the roof. People from all walks of life would be glued to their TV sets watching the seven month drama unfold. Hell, this would be even better than Desert Storm!
In my world, America would get there first, (of course). But, only barely. Other nations craft could be seen landing helter skelter all over the rock strewn ground. Tiny figures in spacesuits would emerge and dash all over the surface. Then, sometime later on a static filled screen, a man would appear on TV's across the planet. Shrugging apologetically, he would be heard to mumble  'oops - our bad'!

Reality Check: Due to an engine failure, the Russian probe is headed in the wrong direction. It's now thought to be headed for Alpha Centuri. And these are the guys we expect to ride to the International Space Station with?
Posted by Dan Owen at 11:21 AM