What you can do about troublemaker and jerks and jerks in Second Life! 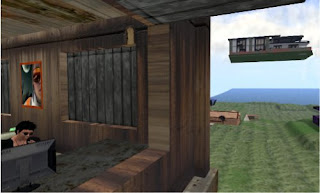 Having been a resident of Second Life for a couple of years now, I have seen most everything there is to see there. I’ve rented building, done some construction, bought land and basically had a good time. That’s been true most of the time but there have been a few avatars that just don’t want to play nice.
What’s even more problematic are the one who haven’t bothered to read the terms of service from Linden Labs, nor actually care about the other avatars they share a sim with. It doesn’t seem to get through to them that behind each avatar is an actual person! You see this much more often the new arrivals than you do the more seasoned players, but no matter what their ‘age’, jerks and troublemakers can really spoil what could be a good time for all.
My most recent encounter with the aforementioned was an avatar I’ll call Rbawlbabey for the purposes of this post. One day I was out check my immediate area for small pieces of land for sale when I happened onto a sky-home that was pretty neat. I checked it out and left when I realized that there was an avatar (Rbawlbaby) at ‘home’. I left and then shortly after I gat a message asking me ‘wtf is your problem dude’?  I wrote back explaining my interest in the house and Rbawlbaby did send me a link. I thought that was that. Then the next day…
‘Hey MF’er, you better stop hanging around my properti (sic)!’ Wow, an IM from out of the blue! This was followed by some more cussing, at which point I simply ‘muted’ the individual. Once you mute someone (or thing), you can’t see them, hear them or receive Instant Messages from them. How very nice. I did get a communiqué from the owner of that land later on, however. Turns out old Rbawl was only 50 something days old. A newbie and a renter! The owner was pretty nice and after a few messages back and forth the problem was resolved. Or, is it? With one of my properties adjoining Rbawl the Renter, maybe they are just beginning!!

For anyone interested in joining Second Life the link is here!
Posted by Dan Owen at 11:59 AM