My Big Breakfast adventure at McDonald's!

“Perhaps the only thing that can be said for my becoming morbidly obese is that there are no more rungs on that ladder to climb!”
That was a passing thought I had in my head just before sitting down to eat a Big Breakfast at the local McDonald's where I live. Seven hundred and forty calories of heart-clogging goodness was sitting right there in front of me just waiting to be eaten. Had I completely lost my mind? Was this some kind of momentary insanity happening to a man whose past dieting history is legendary? Well no. Actually, my visit today was premeditated. (I had even thought to bring a bottle of A1 Sauce with me as I like a little on my hash browns). And yes, the eating of this meal will require some contrition on my part for the next few days, but that was a small price to pay as today I was actually here on a secret mission! You know, as in Secret Agent Man stuff. 'Hey! Where's the butter! Someone forgot my butter!' 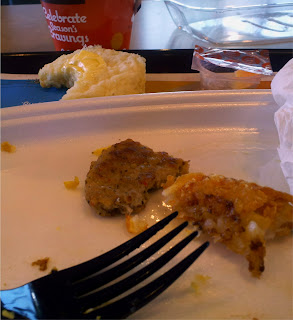 My real purpose, on this overcast mid November day, was to candidly observe my local McDonald's Play Area after having just read an article about how filthy and dirty some of these 'repositories for tots' have been reported to be in other cities. I wondered, was my eatery in the same shape as those visited by Dr. Carr-Jordon in Chicago? I was determined to find out. (And before you tell me, yes I know, I have way too much time on my hands).
Now, I'll admit there were some obstacles in my way considering my gender and all. A single man sitting alone in the children's play area looks a bit odd to say the least; especially a man wielding a camera. (The word pervert comes quickly to mind). But, I did have a cover story just in case I was approached by someone in authority - I'd just look up at them with my watery myopic eyes and profess I was confused. (Now this only works if you're past a certain age, which I am). “Sir, you mean this isn't the restroom?”
It's really too sad that at the last moment, I totally chickened out. The problem was I am also germaphobic and could not bear the thought of eating in an area where ankle-biters in soggy diapers were on the rampage! (I had visions of fecal coliform hanging in the air like some kind of an evil miasmic fog). And, while you may think of me as a chicken, I am also a live healthy chicken, thank you very much!
Thankfully, this particular McDonald's is divided from it's play area by a sturdy set of double glass doors, so I contented myself by choosing a table on the 'safe' side, making sure it was also in a location where I could covertly observe the play equipment. As I watched through the glass partition, eating my meal, I had pause to wonder why my pants were feeling so tight as of late. Interestingly, the same thing was also happening to my pullover shirts as they now just barely cover my 'love handles'. (Truly a sad sight for a man whose desire to lose weight has only been outweighed by his love affair with food). But, I digress. 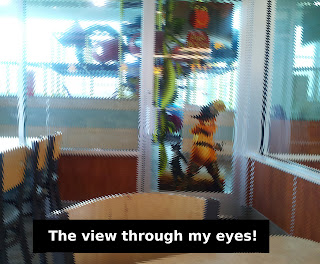 Hey! Why is that glass so blurry? As I sat there eating my meal, looking like some demented cow chewing his cud, I realized I had forgotten to bring my eyeglasses. There were by my bed-stand at home. Sighing inwardly, I sat there eating my meal now looking like a demented cow that was also blind as a bat. I thought about going out to my car to get a set of binoculars, but quickly dismissed the idea. Somehow the thought of an old man peering at kids through a glass with binoculars didn't seem quite right. I'd just have to squint and so, squint I did.
Now if you're wondering whether I ever observed any dirty playground equipment, the answer is WHO KNOWS! Without actually swabbing the equipment and then having it sent to a lab to be tested for pathogens, there is no way to really say. I can tell you that while I was there, I saw at least one kid climbing around in the tubes. (God's way of thinning the herd)? His mom took turns watching him and then watching the old man watch them. I finished my breakfast as quickly as I could and left.

On a serious note: I do feel that McDonald's (and in fact all eateries that have play areas) need to pay particular attention to maintain them in a hygienic manner. Otherwise, they should consider trying something else.
Posted by Dan Owen at 10:31 AM