Trust works only for the young! 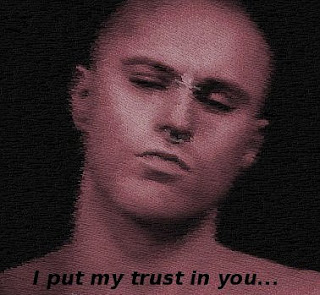 It’s been a long time since I was in my twenties and looked at the world with copious amounts of trust. Back then, I had trust in both people and in institutions. Even the US government did not escape my altruistic vision of a better tomorrow. A world in which my generation would surely step forward to grasp the reigns of leadership, and in doing so, thrust this world towards and beyond a better 21st Century.
[How’s that working out for me these days? Perhaps more to the point, what’s working out for me these days…]
The trust thing is pretty much dried up now, not unlike a tumbleweed. It was blown across the political desert, over dry barren ground, never to be seen again. In its place stands a cactus of a man. An individual all covered with thorns that are meant to keep others away and whose skin is now become so hardened and tough that he no longer feels the touch of true emotion. And like a cactus, his future has become one of bleak survival as he tries unsuccessfully to conserve precious resources in a world where times of drought have become the norm. All is darkness even as he stands in the glaring light of a hot desert sun.
Posted by Dan Owen at 11:37 AM