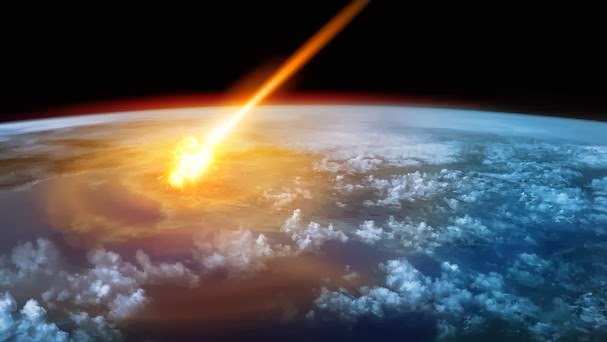 Ukrainian astronomers have discovered a large asteroid heading for Earth which could strike our planet on August 26, 2032, impacting with a force 50 times greater than the biggest ever nuclear bomb! Something for our children to worry about!

Its existence has been verified by teams around the world, in at least 27 distinct observations over the course of the past week, and NASA has been forced to issue an earth impact risk summary as part of its Near Earth Object Program.

According to NASA there is only one other asteroid that has made it to a 1 (out of 10) on the scale. At 130 meters wide, 2007 VK184 (see note below) is nonetheless regarded as relatively high risk because it has a 1 in 1,820 chance of impacting Earth. All other near Earth objects are rated as a 0 – meaning their risk is “effectively zero”.

Gennady Borisov from the Crimean Astrophysical Observatory told the Itar-Tass news agency: “On the night of 12 October, I was watching the Giraffe constellation, it was an in-depth monitoring as part of the comet search program. This is when the asteroid… was discovered. The first observations show that it moves quickly and is relatively close.”

If it struck the earth, the impact from 2013 TV135 would cause damage to an area of approximately 100,000 square miles – the equivalent of x – with an equivalent force to about 2,500 megatons of TNT, or 2,500 standard nuclear warhead-bearing US Minute Man II missiles.

“Here’s a super-goal for our space industry,” said Russia’s deputy prime minister Dmity Rogozin, who is responsible for the country’s space programs and has lobbied for Russia to develop asteroid defense systems.

Astronomers say they will continue to evaluate the risk posed by 2013 TV135, and that they may be able to pin down its exact path – and even a possible impact site on Earth – by the year 2028.


An Earth impact would have the kinetic energy of 3,200 megatons of TNT, approximately 60 times the energy of Russia's 50 Mt Tsar Bomba. This would also be equivalent to 16 times the 1883 eruption of Krakatoa which was 200 Mt and had a Volcanic Explosive Index of 6.


Note: Risk assessments for 2007 VK184 were calculated based on a diameter of 130 meters. It is estimated that, if it were ever to impact Earth, it would enter the atmosphere at a speed of 19.2 km/s and would have a kinetic energy equivalent to 150 megatons of TNT. Assuming the target surface is sedimentary rock, the asteroid would impact the ground with the equivalent of 40 megatons of TNT and create a 2.1 kilometers (1.3 mi) impact crater. Asteroids of approximately 130 meters in diameter are expected to impact Earth once every 11000 years or so. Around May 23, 2014, the asteroid will pass 0.16−0.19 AU from Earth at which point scientists may be able to ascertain more precise predictions as to a possible earth impact in the future.
Posted by Dan Owen at 12:59 PM