On pharmaceuticals and your doctor! 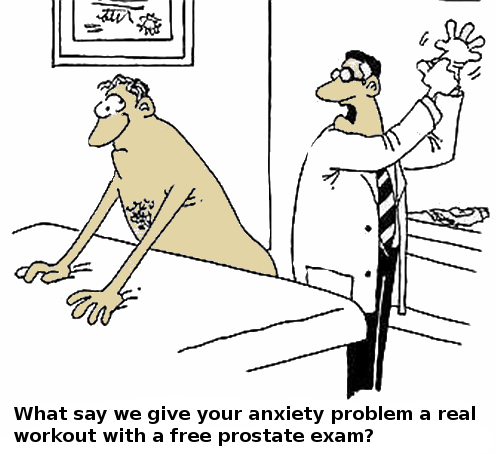 One afternoon, while sitting in my doctors office due to problems with anxiety, I was telling him about the drugs that I felt he needed to prescribe to me. Drugs I'd seen on TV.

“Doctor,” I intoned in my most knowledgeable voice, “I think my best bet would be for you to write me up a prescription for some Xanax”. I told the doctor this even before the examination had taken place. The doctor just looked at me and smiled. Then he asked, “what makes you think Xanax would work, Dan?”

“Well, gosh doc”, I answered now feeling a bit uncomfortable, “I just saw an ad on the TV, and uh, the drug company said it was very effective for all kinds of stuff like what I got!” I was now stammering a bit at that point.

The doctor smiled as he took my vitals, listened to my complaints and then asked, “OK, so let's say I write you a prescription for this drug. Have you any idea what it will cost?”

“Not really even close,” he answered in a quiet voice. “ Since you have no qualifying insurance, it would be closer to $100 for 30 tabs, and oh, did you know that stuff is pretty addictive?”

My doctor was quiet for a moment and then laid this on me. “ Dan, one of the reasons I became a doctor was to help people like yourself. I worked long and hard for my certificate as an MD and have been in the business of helping people just like you for decades.” He paused for that to sink in. “ And, the reason you came to me is because of that knowledge – that is, knowing what might be the best drug or therapy for you to heal or get over a problem.” He sighed and then went on. “The thing is, too many of my patients watch the ads thrown on the TV by drug companies who have only one goal – for you to buy their stuff. And, they figure if you declare to a physician that you really want their junk, then said physician will be compliant and give it to you.”

The doctor then shook his head. “But that's a load of bunk! Remember son, I'm here to help you and that help also includes prescribing you the best, cheapest and most effective drug for a given situation.” He then stood up and asked, “ So, will you trust me and let me do my job?”

Feeling sheepish, I said yes and later left with a prescription for a drug called Buspirone that was; 1) non-addictive, 2) a long term treatment for general anxiety and 3) relatively cheap to boot!

The moral of this story – Ignore the 'crapola' you see on TV concerning drugs. Let your doctor do his job and get you the right stuff at the best price!
Posted by Dan Owen at 11:46 AM