It happened again! Yet another mass stabbing! 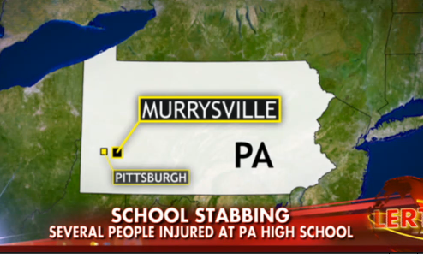 Twenty students were wounded — four seriously — at a high school near Pittsburgh and one person is in custody early Wednesday, emergency officials say.
Dan Stevens, a spokeswoman for Westmoreland County emergency management, told Fox News that the male suspect is in custody following the incident at Franklin Regional High School in Murrysville, roughly 15 miles east of Pittsburgh. More to come on this breaking story at http://www.foxnews.com/us/2014/04/09/suspect-in-custody-after-reports-multiple-stabbings-at-pennsylvania-school/#

When is the madness of allowing people unrestricted access to weapons like knives going to stop! While not yet confirmed, rumor has it that the knife used in the attack was a special combat style knife of the type used by soldiers in the fields of war! How is it that children are even allowed to have such weapons of destruction in their possession? Knives are good for one thing and one thing only! Cutting and stabbing defenseless meat! Congress, along with President Obama, needs to stand up and immediately craft a bill making the mere possession of a knife not only illegal, but a felony misdemeanor as well!

and all knives longer than three inches be confiscated by the authorities. The madness of people wielding such devices of death must stop!


WHY DID I WRITE THIS?
The injuries sustained by these students was grievous and sad and my satire evident. However, I can practically guarantee some left wing nut job (and maybe one or two on the right) will soon point to the weapon as the cause and not the person and his mental illness which is what really needs to be addressed by the nation.
Posted by Dan Owen at 9:18 AM