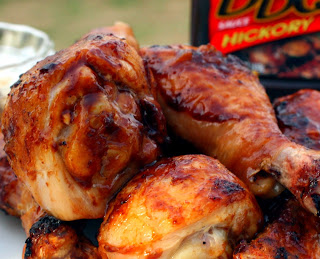 Late summer in southwest Missouri brings some of the best grilling weather of the year, in my opinion. Now living in a condo, on an 80 degree afternoon, I decided to break in my brand new Weber mini grill.

For not a lot of money, I was able to order a Weber Smokey Joe grill along with a functional table that locks the grill into place! This is my second such grill, the first lasted many years and produced many a memorable meal.

I had four large chicken drumsticks and after I got the coals hot, I divided them for indirect cooking. I then placed the chicken legs in the center of the grill, covered it with the domed lid and cooked them for about an hour. I did turn the legs a couple of times and also applied the KC Master sauce during the last fifteen minutes with a basting brush. The end result was some of the best chicken I've ever tasted!
Posted by Dan Owen at 6:24 PM