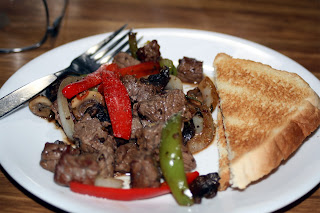 'Making a great beef stir fry is not a piece of cake. I get that! This is especially true, if you are going for a truly winning recipe!' DanO Demento circa 2015

OK, so this was going to be my stir fry attempt number 812. (Please dear reader, just don't fault me for trying). At the ripe old age of 65, I was still bravely carrying forth a culinary effort originally begun at the tender age of 15. And yes, while my peers were moving on to Junior High, and then to High School and even college; I was existing in a damp basement with only a Janis Ian record, a dented wok and an old propane grill for company! At night, I'd scrounge around in back alley dumpsters for bits of green pepper and other edible odds and ends. Most days, my stir fry efforts were an abysmal failure. I remember once on the 70's, while in a drug induced stupor and listening to Jimi Hendrix, I'd assembled a truly nightmarish mix! It contained only some chunks of meat, Worcestershire sauce and chopped cantaloupe... seriously? Hey, I was surviving back in those days, just not eating very well...

2013 AD- Man, the decades came and went by so darn quickly... (Alas, opportunities to make something of myself also came and went even more quickly). Sadly, all those years I spent in a basement attempting recipe after recipe, were not very kind to me physically. Yet over that time, I did became a man, (abet a person who was sullied and intellectually shallow), as I had foregone any formal education while engaged in my search for the Holy Stir-fry Grail!

Looking back. I realized I was abnormally obsessed with that effort, even to the point of self destruction! (I'd even had a tattoo placed on my forehead that read 'HSG' for crying out loud)! A mark that I'm sure chased many a promising young woman away. And still, time moved ever forward...

2015 AD – At last! Now, an aging and decidedly ugly old gnome, I'd finally stumbled across a recipe that I thought just might vindicate myself lo these many years! Please, let me share.... In the background Janis sang 'At Seventeen'..... 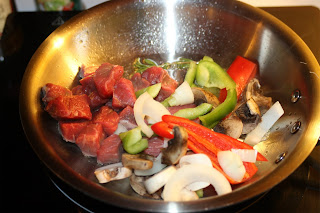 Heat all the above in a frying pan over medium heat until done! See! That's pretty darn easy and awesome. Refrain:

'I've learned the truth at 65, on stir fry beef you can survive. While others strive to be supreme, I've been living a hot pepper dream....Yes, small town eyes will gaze at you when exceptional food exceeds accounts received!'