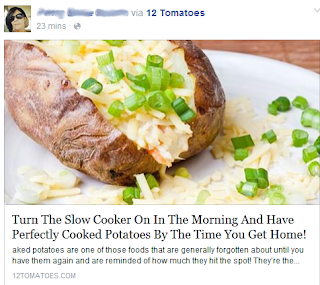 Scenario: There was a post on Face Book about slow cooked stuffed potatoes. I clicked on the link and viewed the recipe with some interest. After reading it, I was intrigued, but wondered about exactly which type of potato would do the best after hours in a slow cooker? Russet, red or one of those larger bakers? I had no idea and so went to the purveyor of all knowledge these days – the Internet and Googled it. One link informed me that Red potatoes did the best in holding together in a slow cooker environment. True? But, aren't they sort of smallish? I decided to find out which was which and what was what!

Here's the way this story was originally laid out. 'Your wanting to enjoy a great stuffed potato, but lack the resources or time to bake one the old fashioned way' – [The real truth is you're like me – you are very, very lazy]. And so, the fabled slow cooker comes to the rescue! You get up, you wrap a tuber in foil, drop it into your crock pot, set to low, and then head off to work. Eight hours later, you arrive exhausted but can quickly sit down to a great stuffed potato meal! Sounds good, in theory. Let's see how it really worked out in practice!
------------------
8:00 AM – The coffee pot was doing its thing (it was set on automatic), I emerged from my shower and grabbed a cup of hot Joe.... It was just about that time that I realized that I was retired and didn't even have a job, so I finished my coffee and headed back to bed. Zzzzzzzzzz

12:00 Noon – I arose, got dressed and decided to FORGET ABOUT IT! – Instead, I nuked a Russet potato in the microwave for 5 minutes on high. Loaded it up with sour cream, broccoli and bacon bits, a little grated cheese and enjoyed it while watching the Chiefs on the tube! Hey, it is the 21st Century after all! (The taste, by the way, was all it could be)!

Note: If anyone does try this out in a slow cooker, please comment. Also, everyone should go easy on how often they consume this tuber. It has one of the highest glycemic indexes of all the foods we like to eat!